I grew up helping my mother in the kitchen at every meal, and we cooked most everything from scratch from food we grew ourselves.  I lament the loss of this most important aspect of family life from our modern culture, and think it’s largely responsible for many of the problems our society faces – problems they are trying to solve with legislation when the solution is for everyone to take back their personal responsibility…. But I digress.  My mother was a college trained chef, two-time graduate of Johnson & Wales with a BA and a MA in Baking and Pastry who did her best to make sure I learned all the proper classical French techniques and their names (though I’ve never been able to make bread as delicious as hers.)  We watched hours of Julia Child, the Frugal Gourmet, Yan Can Cook, Jacques Pepin and others I can’t remember the names of but to whom I owe a debt of gratitude for contributing to the vast library of culinary knowledge of which I am now the curator.  While the go-to for many of my friends’ moms was the Betty Crocker Cookbook, or more rarely, the Joy of Cooking, the culinary ‘bible’ in my house was James Beards’ American Cookery.

For 30 years this well-loved tome has been the go-to in my house, most especially for bread and dessert recipes.  Since inheriting it I have added even more scorch marks and splatter to its greasy-fingerprinted pages, and look forward to the days of sharing this with someone who will likely inherit it from me.  While most of the recipes are classical French haut-cuisine, they are well written and easily prepared, a trait which I did not find to hold true in the Joy of Cooking.  The book’s only major drawback, if you consider it one, is that it does not contain recipes for many more of the later American classics such as Chili and American Chopsuey.

As a child, I did not understand the reasoning behind many of the classical techniques.   As I grew and learned, I gained a basic understanding of the limited tools and technologies that existed when many of these recipes were developed, as well as the delicate chemistry on which many recipes are founded.  So it is rare that I question a technique – regardless of how odd it sounds, I usually understand they why of it by the time I finish the recipe.  There is ONE technique, however, I have never understood, and to this day I do it my way, regardless of what “proper” is – the traditional method of roasting a bird.

As a child, and indeed, throughout my life, the most common complaints I’ve heard about oven roasted bird meat, especially turkey, is that the breast meat is always too dry, and the thigh meat is too greasy.  Yet, most people place their birds’ breast up, and thigh down, in the roasting pan.  WHY?  I can only suppose that at some point, someone decided the browned skin on the breast of the bird was more presentable or appealing?  Julia Child attempted to solve the problem by roasting the bird in a covered pan, then browning it at the end using a torch (I’ll never forget that episode, she set the curtains on fire with the torch!!) However, the science is all wrong.  With the breast up, the meat dries out completely, the juices either baking out or running down to soak the already fatty leg meat.  So around the age of 15, I started roasting my birds breast-down in the pan, in the same position they would be in if standing.  The leg and thigh meat is juicy without being greasy, and LO! the breast meat is moist and flavorful.  And while, to some, the birds back may not be as rounded and aesthetically pleasing as its breast, the browned skin is just as (personally, I think more so) delicious as the skin of the breast.   I think we could all agree, especially for family dinner when the quality and enjoy-ability is more important than someone’s notion of “presentable”, the traditional method definitely falls flat on its back. 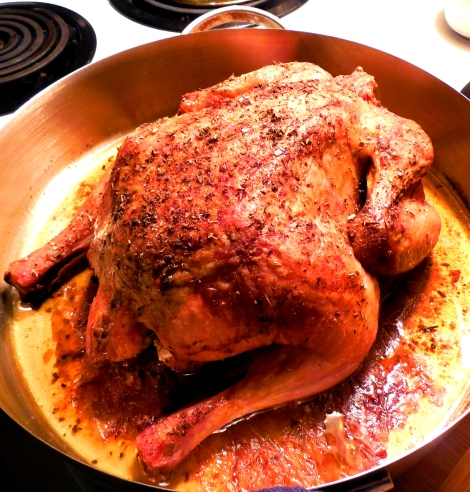 The Persistence of Gravity
The Planet D: Adventure Travel Blog

Comments for Canvas of Light ~ Photography

tech and tips to help you travel smarter